Hola! We lucked out with Dolphins, Hammerhead Sharks and Manta Rays during this trip.  We heard of Humpback Whales from a long distance. It maybe affected by the Killer Whale, which had been seen in January. The 1st day of diving was at El Canyon. Right after a huge Hammerhead Shark passed by, there were three Dolphins came close to us as if they asked us to play. We stayed at El Canyon for 3 more dives and enjoyed to see variety of Sharks. The 2nd day, we had to give up on diving at El Boiler because of the strong north wind. So, another day for El Canyon! Dusky Sharks, Galapagos Sharks, Hammerhead Sharks and Chevron Manta appeared.  Besides, a 4 meter size of Tiger Shark approached us! It was a bit scary but exciting. The 3rd day, at Cabo Pearce, Hammerhead Sharks and Silky Sharks were seen. The day 4 and 5, at Roca Partida, it was very exciting to see Hammerhead Sharks, Silky Sharks, Silvertip Sharks, Galapagos Sharks, Whitetip Sharks, Bigeye Trevallies, Black Jacks, Cottonmouth Jacks, etc. There was a gigantic wall of those big fish in the water!  Plus, a huge school of bigger Yellowfin Tunas made a big stream of them, such an excited sight to see. The day 6, at El Boiler, Dolphins were very playful.  Then, Chevron Mantas got jealous and cut in between Dolphins and us, divers! We were very busy to play both of the Dolphins and Chevron Manta. The air temperature was 18-24 deg.C. The water temperature was 24-25 deg.C. The combination of a 5mm wetsuit and an inner shirt was recommended. Please don’t forget to bring a windbreaker for the deck. Thank you all for joining us and also for making this trip fantastic. Hope to see you all again! 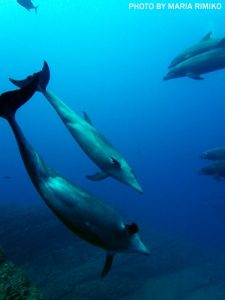 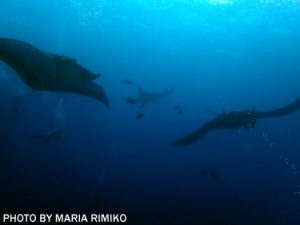 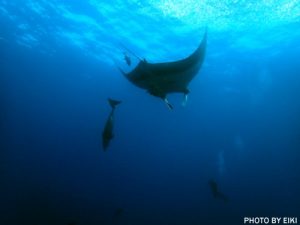 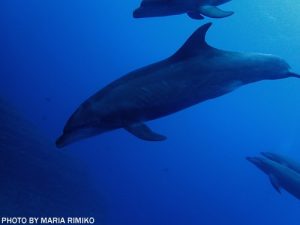